A group of precesses, run in isolation. They run on a shared kernel. The isolation is provided by Linux namespaces.

VM vs Container VMs are heavy and slow to start because they have a full OS. 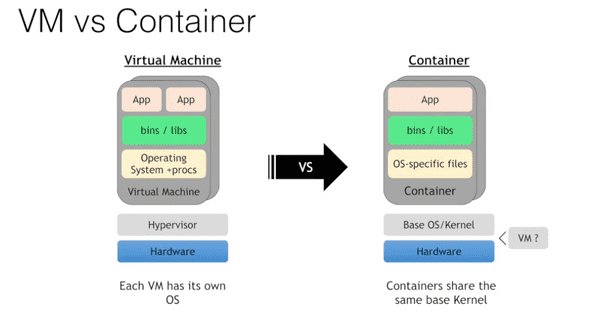 containers can be directly run on top of virtual machines.

Docker is tooling to manage containers. “build once, run anywhere”

Why containers are appealing

The docker run command first starts a docker pull to download the Ubuntu image onto your host. After it is downloaded, it will start the container.

Even though we are using the Ubuntu image, it is important to note that the container does not have its own kernel. It uses the kernel of the host and the Ubuntu image is used only to provide the file system and tools available on an Ubuntu system.

Namespaces are a feature of the Linux kernel. However, Docker allows you to run containers on Windows and Mac. The secret is that embedded in the Docker product is a Linux subsystem.

--detach flag will run this container in the background. the publish flag publishes port 80 in the container by using port 8080 on your host.

The name flag names the container.

Then, we can run another container :

We can see the containers by running docker container ls.

⚠️ Note : You should avoid using unverified content from the Docker Store when developing your own images because these images might contain security vulnerabilities or possibly even malicious software.

You can also have a private registry, self-hosted, or cloud provider options.

to make pushes faster, the lines in the docker file that change the most should be at the bottom of the file. Because when you invalidate a layer, you automatically invalidate the layers after it. So if it is the last layer, we optimize the caching system.

Paste this in a file called app.py to create a simple Flask app :

Creating and building the docker image

Create a file named Dockerfile and add the following content:

The FROM line specifies the starting image to build your layers on top of it. In this case, you are selecting the python:3.6.1-alpine base layer because it already has the version of Python and pip that you need to run your application. he alpine version means that it uses the alpine distribution, which is significantly smaller than an alternative flavor of Linux. A smaller image means it will download (deploy) much faster.

It is best practice to use a specific tag when inheriting a parent image so that changes to the parent dependency are controlled. If no tag is specified, the latest tag takes effect, which acts as a dynamic pointer that points to the latest version of an image.

For security reasons, you must understand the layers that you build your docker image on top of.

The RUN command executes commands needed to set up your image for your application, such as installing packages, editing files, or changing file permissions. In this case, you are installing Flask. The RUN commands are executed at build time and are added to the layers of your image.

CMD is the command that is executed when you start a container. Here, you are using CMD to run your Python application. There can be only one CMD per Dockerfile. If you specify more than one CMD, then the last CMD will take effect.

This line copies the app.py file in the local directory (where you will run docker image build) into a new layer of the image.

It seems counter-intuitive to put this line after the CMD [“python”,“app.py”] line. Remember, the CMD line is executed only when the container is started, so you won’t get a file not found error here.

For full specifications about the Dockerfile :documentation here.

Then, we can build the Docker image.

The -t parameter allows us to name the image.

then we can run

to see our image !

To see the logs :

The Dockerfile is used to create reproducible builds for your application. A common workflow is to have your CI/CD automation run docker image build as part of its build process. After images are built, they will be sent to a central registry where they can be accessed by all environments (such as a test environment) that need to run instances of that application. In the next section, you will push your custom image to the public Docker registry, which is the Docker Hub, where it can be consumed by other developers and operators.

Push to a central registry

Login to the docker registry :

Tag the image with you username. The Docker Hub naming convention is to tag your image with [dockerhub username]/[image name].

You can see your image on docker hub in the browser.

Notice the “Using cache” for Steps 1 - 3. These layers of the Docker image have already been built, and the docker image build command will use these layers from the cache instead of rebuilding them.

There is a caching mechanism in place for pushing layers too. Docker Hub already has all but one of the layers from an earlier push, so it only pushes the one layer that has changed.

Each of these lines is a layer. Each layer contains only the delta, or changes from the layers before it. To put these layers together into a single running container, Docker uses the union file system to overlay layers transparently into a single view.

Because image layers are read-only, they can be shared by images and by running containers. 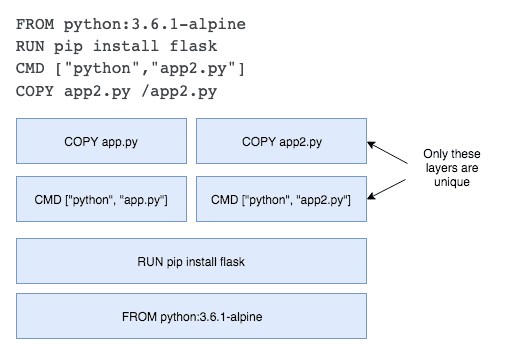 Because the containers use the same read-only layers, you can imagine that starting containers is very fast and has a very low footprint on the host.

What is container orchestration ?

Setup a 3 node cluster with container orchestration with Docker Swarm.

To add a worker in this swarm :

To add a manager :

You can think of Docker Swarm as a special mode that is activated by the command: docker swarm init. The —advertise-addr option specifies the address in which the other nodes will use to join the swarm.

With other instances, you can join the swarm by running

Back on node1, run

To run containers on a Docker Swarm, you need to create a service. A service is an abstraction that represents multiple containers of the same image deployed across a distributed cluster.

The —mount flag is useful to have NGINX print out the hostname of the node it’s running on. You will use this later in this lab when you start load balancing between multiple containers of NGINX that are distributed across different nodes in the cluster and you want to see which node in the swarm is serving the request.

Update your service with an updated number of replicas.

Determine how many nodes you need

For a production application, you should provision a cluster with multiple manager nodes to allow for manager node failiures. At least 3 manager nodes, but no more than 7. 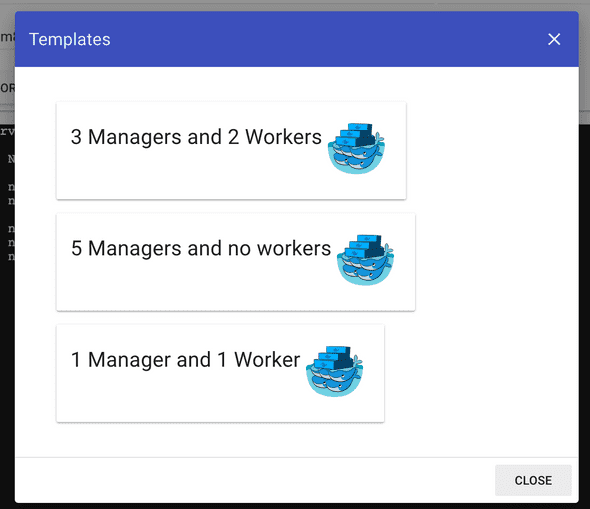